This photo has circulated in reports since at least 2014, years before the COVID-19 pandemic

A blog post has been shared thousands of times in multiple Facebook posts which claim it shows a video of a baby who died after being infected with the novel coronavirus, which causes the disease COVID-19. The claim is false; the blog post in fact shows a photo that has circulated online since 2014 in reports about a man who killed his wife and children in New York City. 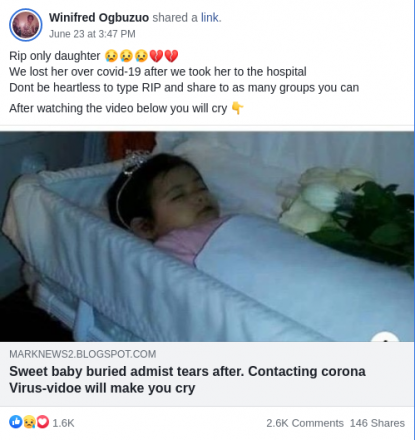 A screenshot of the misleading post taken on June 29, 2020

The post’s caption states: "Rip only daughter / We lost her over covid-19 after we took her to the hospital / Dont be heartless to type RIP and share to as many groups you can / After watching the video below you will cry".

The link leads to a blog post published on June 23, 2020. The post contains a photo of a child in a casket alongside the title: "Sweet baby buried admist tears after. Contacting corona Virus-vidoe will make you cry".

The same link has also been shared here, here and here on Facebook alongside a similar claim.

The claim is false; the photo was has circulated online since at least 2014, years before the COVID-19 pandemic.

A combined reverse image and keyword search on Google found the photo published on this Spanish-language website on January 24, 2014. The article reported that the child was a victim of domestic violence in New York’s Queens borough.

Details in the 2014 article led to this October 10, 2014, New York Times report, which is titled “Queens Man Pleads Guilty to Killing Wife and 2 Daughters”.

The article states in part: “A Queens man pleaded guilty on Friday to charges that he fatally stabbed his wife and two young daughters in a jealous rage as they slept in their beds in January, the Queens district attorney’s office said.

“Mr. Mejia-Ramos had previously admitted in court that, after seeing pictures of his wife, Deisy Garcia, 21, with another man, he used a kitchen knife to repeatedly stab her, beginning on Jan. 18, until she died on Jan. 19. He then used the same knife to kill his daughters, Daniela, 2, and Yoselin, 1.”

The names of the victims were also published in the caption for a photo similar to the one in the misleading posts, as seen in this Spanish-language report dated December 24, 2015.

Below is a screenshot comparison of the photo in the 2014 article (L) and the one in the 2015 report (R) with corresponding features circled in red by AFP: